Report of a week's worth of writing about a man and his shapeshifter friend.

The story so far

On his way back from work, Cassian, our protagonist, finds a wounded cat lying on the ground. Saddened by the state of the animal, he decides to take him home and nurse him back to good health. The young man never had the chance to take care of a critter before, despite his love for them, so this black, chubby cat was a godsend for him. However, the cat was acting a little odd. Multiple times, Cassian wondered if the constant staring, mass toy destruction and the ability to understand human speech was considered normal in the cat population. He felt observed and judged by the feline, much to his discomfort.

It was around this time that he passed a “missing cat” poster on his way to work. The blurry cat photo printed on it looked very much like his own furrball at home. Devastated, Cassian spent the rest of the day wondering if he should call the number and return the cat to his rightful owner. He finally convinced himself that calling was the right thing to do, even if it tore his heart apart. Back at home, he called the number and agreed to meet the owners later this evening, near where the cat was originally found. However, the cat was not very happy to be displaced so unceremoniously. Cassian spent a full hour battling the beast, trying to get him into a cardboard box. He got bit, he got scratched, he cried in his bed for a while, but, maybe out of pity, the cat finally let himself get caught.

Cassian went to meet the owner. But when the two owners turned out to look like two villains out of matrix, the young man got suspicious. He tested them, trying to figure out if the cat in the box really was theirs. They didn’t refer to him with any name, they didn’t have his health book or any official papers confirming that they were the owners of this specific cat. Usually, Cassian would let it slide, because sometimes, you find a dirty cat in the garbage and you take it home. But in this particular situation, the two guys were pressing him, implying that bad things were going to happen if he did not comply.

After long minutes spent arguing, the cardboard box pressed against Cassian’s chest started to violently shake. Everything happened very fast. A dark-haired man appeared out of thin air before Cassian’s eyes, the suspicious men turned out to be armed. Then, gunshots, a sharp pain, a dark void.

Cassian woke up with a homemade bandage on his belly and the same dark haired man he saw earlier, sitting in front of him. He looked rough around the edges, a mean look to his eyes, similar to Cassian’s dark cat. Wait… The cat! He forgot about the cat! But the man before him started to speak, and what came out of his mouth confused Cassian even further. The man’s name was Elie, he was a shapeshifter. Yes, the black cat Cassian found was actually a human in disguise. Or is it the other way around? Cassian didn’t ask. Either way, Elie was being hunted by those men Cassian met earlier and, with his cover blown, he had to find a new spot to hide. But here’s the catch, now that the hunter knew about Cassian, Elie had to take him with him, or he would get captured, tortured, and give out where Elie was hiding.

The two men set off on a very stressful, not very fun, road trip together. A road trip where Cassian will learn more about Elie and the people hunting him down 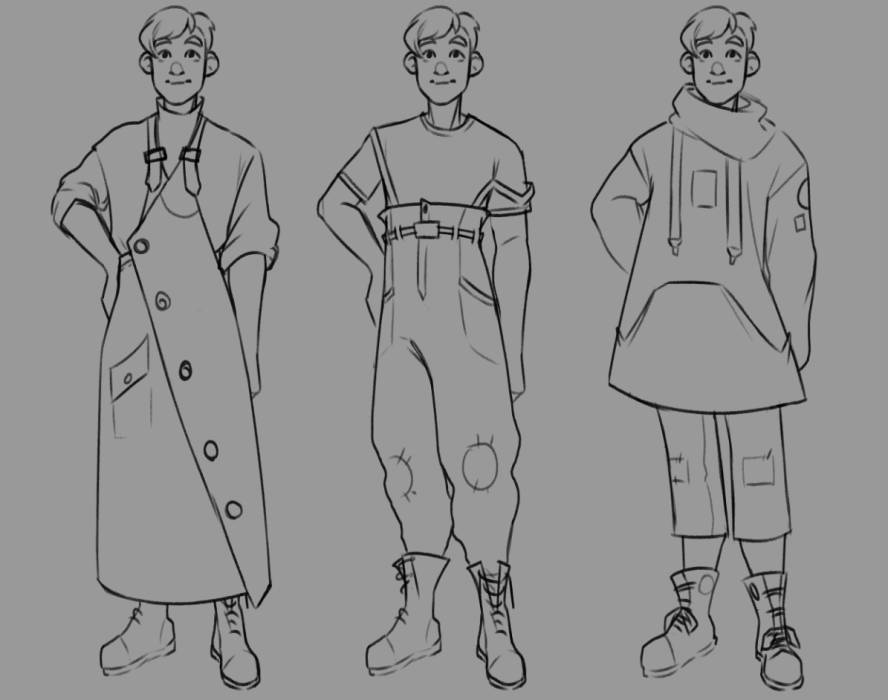 Cassian works as a part-time cashier and uses his free time to try to set up his own business as a freelance carpetmaker. He has a collection of plants in his apartment and loves animals, even though he doesn't own any pet yet. He has a personality that one might think as passive, but actually, he is just trying to make the experience of the people around him more enjoyable. He is very sensitive to the mood of the people around him.

Elie is a shapeshifter prone to violence. He is talkative and likes to mess with people. He does not trust people easily but is very loyal if you manage to befriend him. He can turn into a black cat or adopt physical characteristics of a feline on his human form (for example, having claws on his fingertips.). After losing his sister, he decided to turn his back to the guild and embrace his true nature. He’s been relentlessly hunted since that day.

These hunters are part of a guild dating back to the Middle Ages. This guild hunted shapeshifters on behalf of “protecting the world from the evil’s grasp”. Nowadays, this guild identifies the shapeshifters and pushes them to live as humans by providing various aids and supports. However, denying their true nature is extremely hard for shapeshifters. Suffering from depression and various anxiety disorders, they become shadows of themselves and end up in an almost irrecoverable state.

"They used to just kill us. Now they pretend to help us, but the result remains the same: we die face down. I'd rather they put a gun to my head than give me money and check my back for “unusual hairs”." - Elie