My Week : Creating tools and more ...

Come and see what I have been doing these past few days !

My work this week

As the titles says, I have been working on some interesting and new things. I will show you what are some tools I created but first of all, I'll tell you how I did a small scene on the Unreal Engine.

For you my love, I will never stop fighting. For even in death you bring beauty to this world. 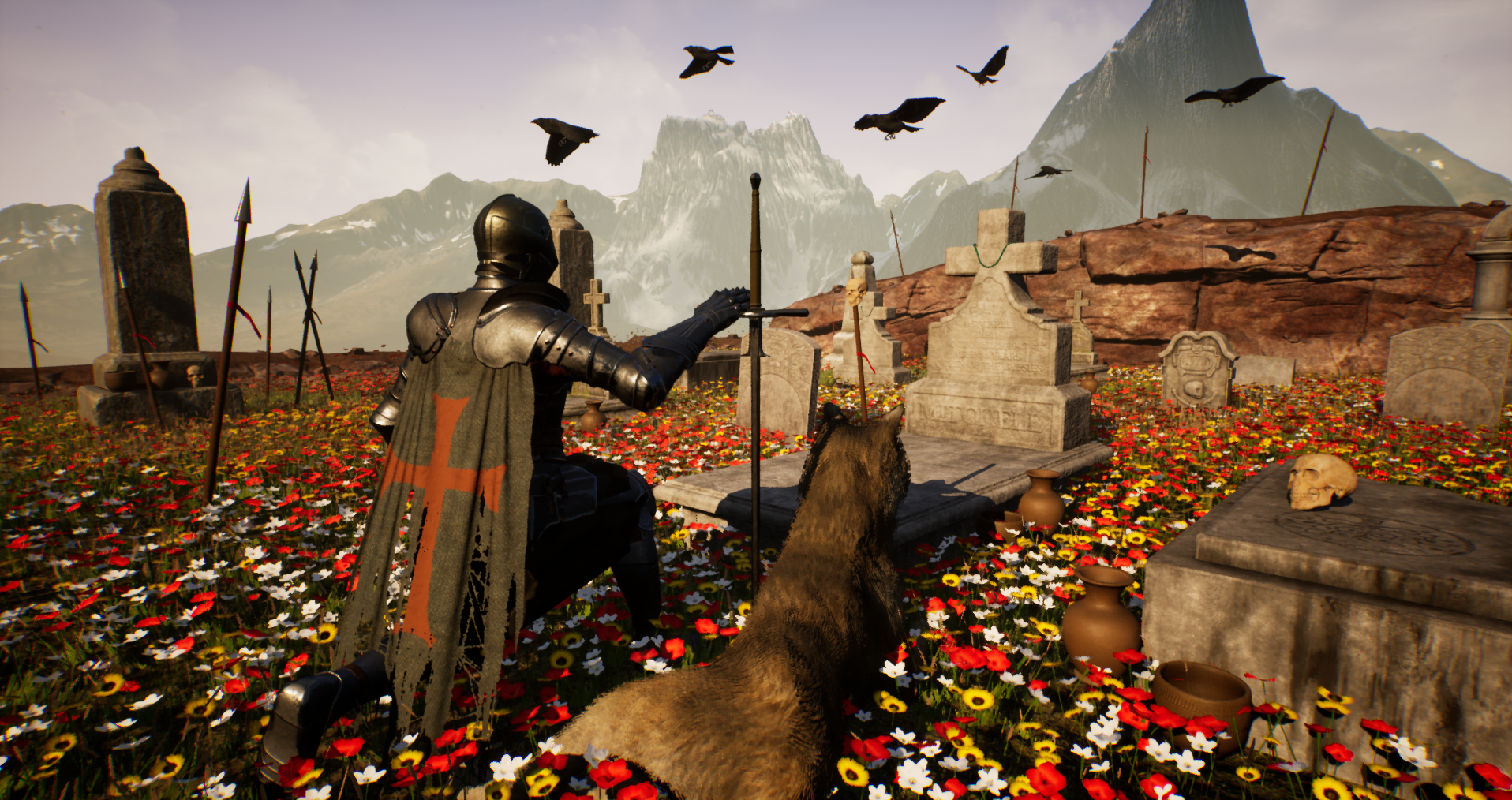 This scene tells the story of a knight and his wolf paying respect to the grave of the woman he loved and who brought beauty to his world.

With every months Epic Games releasing free assets from the marketplace for us to use for our creations, I decided to work on a scene using some incredible assets we've been offered.

Using the "Cemetery - VOL 1" pack I created a small cemetery sourrounded by mountains to create an impression of quietness and emptiness around . In a cemetery there is usually a sadness that comes with it, and to counter that I used the assets included in "Plants pack". This pack contains different type of flowers and grasses that I used to cover the ground with. I directly created the contrast between sadness and joy that I was hoping to get from combining those 2 packs.

The next step was to add a knight kneeling in front of the grave. For that, I used the "Gothic Knight" pack. I then created a new animation in which the knight was kneeling with his hand on his sword. I didn't wanted to add more to the knight, he represents strongness and power and having him kneeling shows that, as strong as you are, love is always more powerfull.

For the animals (wolf and crows), I used an old pack "Animal Variety Pack" that was offerend long ago. The wolf was added to show that it can feel the feelings of the knight, and it respects those feelings and keeps him company at all times. The crows were added to increase the feeling of darkness and sadness coming from a cemetery. they are seeing flying as if they knew it wasn't a place for sadness.

The landscape was taken from the "Spring Landscape" pack that was offered long ago. Using the mountains I added the feeling of emptiness and quitness as I said earlier.

I then added some temperature to the light, to break the darkness of a cemetery and to represent the life that also comes with an inevitable death.

I have been using the Unreal Engine a lot for the last 2 years, but everytime I started a new projects, there were some things that I would recreate over and over. So I thought it would be nice to create some, what I call tools, to help me create prototypes and games faster.

I won't show you pictures, it will be boring to look at and won't give you much informations, but here are the 3 things I worked on :

I do a lot of plateformers, and everytime I need some moving platforms so I created 1 actors with lots of variables that could control easily the behavior of those plateformes. They can go from left to right, up and now, they can follow a path as long as I want it to be. It worked really well, but I wanted to add something else... So I decided to add a parameter to make the plateform turn around a chosen point, to easily add more variation and richness to my level design.

Then, i wanted to create a spawner for my ennemies. I wanted to have easily have the possibility of chosing what ennemies are going to spawn, how many and how powerfull they are. After hours of headache, I managed to make it work. It will be usefull for me in the future and it will help me with testing combat mechanics in my possible future games.

Last thing I did was to create a dungeon generator. I usually create all my levels by hand, but sometimes it takes too long or doesn't fit the type of game I'm working on. I haven't finished it yet, so far it creates random rooms and line them up for the player to walk in the dungon, but it doesn't have turns, it's only linear. With more time, I think I will be able to add more complexity to the algorithm.

Thanks for reading this article, If you want to see other scenes I worked on, please click on this link : MyInstagram